Home Articles What is subnetting?
Simplify management and monitoring with NetworkCalc Pro
Get Pro 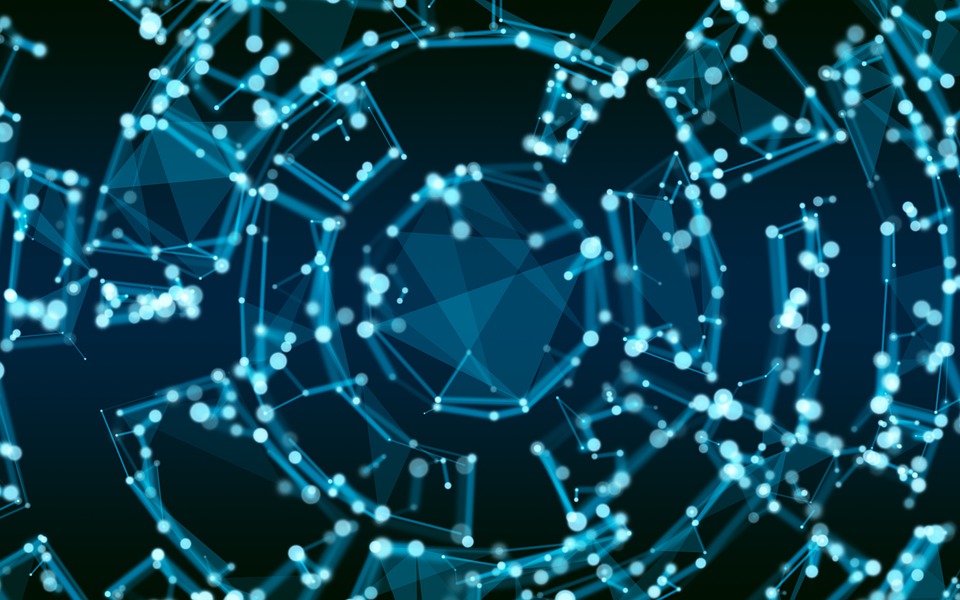 Modern networks are built to be subdivided into sub-networks known as subnets. In this article, describe the concepts and calculations involved in building and managing subnets.

As a companion to this detailed article, download my free PDF subnet chart, which is an excellent reference for subnets.

An IP address is the network address of a device, specified in a dotted decimal notation (www.xxx.yyy.zzz) or a as a binary number. A network device can be a server, a piece of network equipment, a client computer, a mobile phone, or something else. Any device capable of communicating on an IP network needs an IP address to participate on the network.

Let's build up a concept of a network next. Consider the following network diagram: 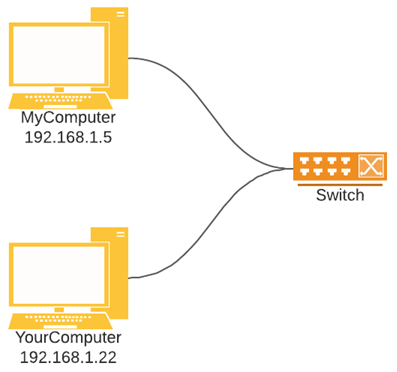 A switch is a network device that connects devices by relaying packets they send to other devices on the network. MyComputer and YourComputer are both connected to the switch via a network cable in this example. This allows MyComputer to send data to YourComputer by sending a packet across the network cable. The switch will intercept the packet and forward it to other devices connected to it.

Now suppose this network needs a server to host a website that MyComputer and YourComputer can access: 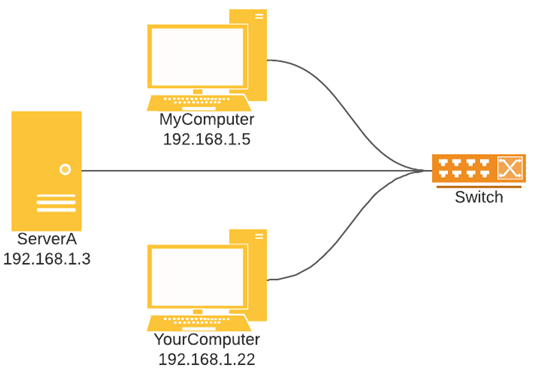 Following the same network principle as before, MyComputer, YourComputer, and ServerA are all connected by a network cable to a switch. Any communications between devices in this network are handled by the switch and relayed to the appropriate host or hosts.

Let's add one more detail to this - a requirement to separate workstation traffic from server traffic:

Switches relay data packets to all directly connected devices. To allow for the separation of communications between devices, a router is used. A router is a network device that selects the network path for communications to follow based on a defined set of rules. In the diagram above, the router would be responsible for routing data to path A or path B based on a set of rules. Examples of rules the router could follow are:

The general rules to take away from routing and switching are the following:

From this perspective, a network is a system of interconnected devices, each of which having an IP address, whose communications are mediated by network equipment such as routers and switches.

A subnet is a logical subdivision of a larger network into non-overlapping IP address ranges. It could be as small as a single host or as large as an entire internetwork. It is desirable to subdivide a network for many reasons. The primary reasons for subdividing a network are:

Every IP address on a network has at least two components that define it: the IP address and a subnet mask. A subnet mask is a 32-bit binary number that specifies how a network should be subdivided into subnets.

Let's look at an example:

This network has a network address (the first address in the network) of 10.0.1.0. The "/24" is a part of CIDR notation that indicates 24 bits are to be used for the subnet mask. Given the subnet mask of 24, we can conclude that the first 24 out of 32 bits in the address are used to distinguish different subnets, while the remaining 8 bits are used to distinguish hosts within a subnet. We use bits in subnetting, since IP addresses and subnet masks can be represented in binary notation:

When subdividing networks, each additional bit used for the subnet mask results in twice as many subnets, each half the size. A /24 (read: "slash twenty four") subnet can be subdivided by adding one bit to the subnet mask, making it a /25 subnet. When doing so, the 256 addresses in a single subnet become 128 addresses in two subnets. Subdividing a /25 into a /26 likewise doubles the number of subnets and halves the number of addresses in each subnet. The following table illustrates this subdivision process:

Download a FREE Subnet Chart PDF to use as a printable reference for subnet calculations.

The procedure for subdividing a network into subnets is as follows:

Subnet calculations are possible if we convert IP addresses from dotted decimal notation to binary numbers. Since an IP address consists of four octets ranging from 0 to 255, separated by a period, the same IP address can be represented by converting each octet into an 8-digit binary number and removing the periods between octets.

In this example, we convert the IP address 10.0.1.0/24 from dotted decimal notation to binary:

Next, we convert the subnet mask into binary by listing 24 ones followed by 8 zeroes:

This entire process is made easier by using an online subnet calculator, but let's take these calculations further. Enter a CIDR address or IP address below to find the details of the network.

link
Use CIDR notation to quickly look up details of IPv4 subnets and CIDR blocks.

What is the Network Address for a Subnet?

To determine the network address (network prefix) for a subnet, perform a bitwise logical AND between an IP address in the subnet and the subnet mask, both represented in binary. Follow these steps to find network addresses:

Suppose we want to find the network address for 10.0.1.15 on a network using 24 bits for its subnet mask. The steps are shown below.

What is the Broadcast Address for a Subnet?

To determine the broadcast address for a subnet, convert an IP address in the subnet to binary and set all the bits in the host portion of the address to 1. Follow these steps to find broadcast addresses:

Suppose we want to find the broadcast address for 10.0.1.15 on a network using 24 bits for its subnet mask. The steps are shown below.